This is no support platform! To report bugs or request support, please contact us directly. If in doubt ask us.

First search for a similar request and add your votes or comments there.

Take the time to describe your request as precise as possible, so users will understand what you want.

Thank you for your help!

No similar topics found.
No topics

This is good but sadly when working at night the side panes are still white and occurs lot of eye strain.

I would love to see a color switch of the whole interface including panes, menus, button bar...

Update: If you want to explicitly specify the sort order of branches, vote for https://smartgit.userecho.com/topics/833.

In a typical workflow, I develop on a "Sprint" branch, merge code into a "Test" branch, followed by a merge into a "Production" branch. However, the ordering of commits in SmartGit can make it challenging to see exactly where my Test/Prod branches were merged. Further, it can be challenging to see if a certain commit has made it live. 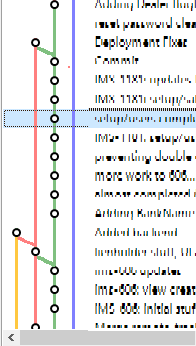 Purple, green, pink, orange, thin/thick lines .... what branch is which?

It would be useful to have a mean to determine the branch associated to each line.

Also, hoovering the mouse cursor over a line would show the branch name and the last 'x' GIT operations made against that branch.

Support for displaying merge requests, like for the GitHub integration

Applying a stash may fail due to conflicts. It would be helpful to be able to view what is in a stash and selectively apply a subset of the files.

Visual Studio Team Services is a popular and common tool among .net developers.

Although SmartGit can clone / pull ... from the Git repo, it is lacking proper integration similar to Github.

For example it would be desired to be able to do Pull Requests from within SmartGit, rather than jumping to another tool.

All smartgit.properties settings should be discoverable and editable in a UI dialog

There's a large number of very useful customizations that can be made via smartgit.properties.

What I would like is for a UI dialog (perhaps "Customize") to list, document (via a tooltip) and allow editing of every supported setting that can be configured in smartgit.properties.

I'm fine with the editing being raw text like it is now. I just want everything in one place.

A bonus would be a column listing what version the setting was introduced in, so it's easy to see when new settings have been added.

Allows to see the diff between the Index and the selected commit.

As in the GIT the diff recursive to submodules is already available, I would really love to use them on a graphical GUI of Smartgit as well. In the latest version we only see that there was a commit reference change on the submodule level, but we don't see what happened inside. So, we go to the submodule, search for the commit hashes and check the differences, but it is sometimes very annoying and tedious.